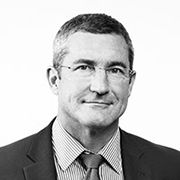 Professor Wilson graduated from The University of Sydney in 1984, completing his FRACS in general and cardiothoracic surgery at Royal Prince Alfred Hospital. He then completed a fellowship in transplantation surgery at Stanford University Hospital, California, and a cardiac surgery fellowship at Toronto General Hospital. Professor Wilson spent seven years within the heart and lung transplant surgical unit at St Vincent’s Hospital in Sydney before returning to Royal Prince Alfred Hospital in 2005. Professor Wilson is now establishing his practice at Macquarie University, Mater and Northern Beaches Hospitals.

Professor Wilson has an international reputation for applying new technologies to complex heart and lung surgical problems. He is sought after for his expertise in managing patients with complex problems. He has been involved in several ‘first-in-man’ procedures and is a great advocate for teaching the next generation of surgeons to think outside the square and become innovative too.

See the following links for news about robotics in cardiothoracic surgery

The best surgeon will be a robot. View here.